Details of the incident
According to ASK’s investigation, at around 7:00 pm on 16 August 2019, a fire took place in the Chalantika Slum, the 7 No. Jhilpar slum and Arambagh slum at Rupnogorostho, Mirpur, Dhaka Mirpur, Rupnogor. Around 3000 houses from these three slum areas along with the things inside them have burned down. The three slums have been constructed over a lake and the area belongs to the National Housing Authority. The poor people have built shanties over this lake and started to live there since the year 1990. The current population of the three slums is of approximately 8000 people.

On 17 August 2019, when ASK representatives arrived at the burned down slums, they saw that many slum-dwellers were trying to retrieve their belongings from burned shanties. 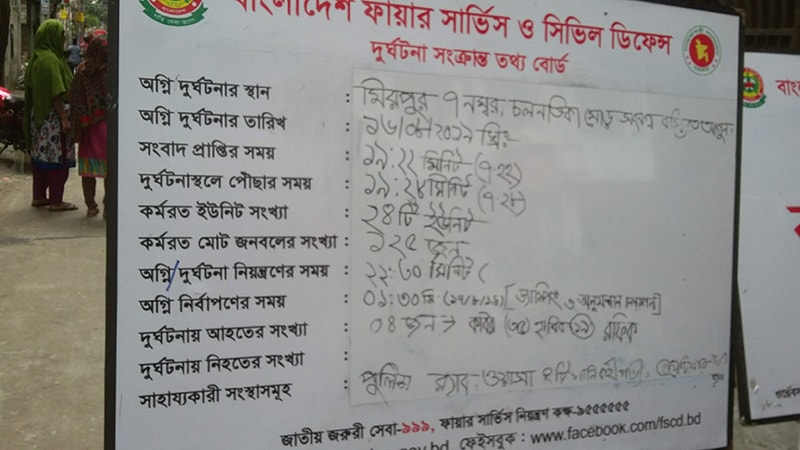 Slum-dweller, Kakon Bibi, Husband- Ershad, Present Address- Arambagh Slum, Rupnagar, Dhaka, Permanent Address- Charpotka, Police Station and District- Bhola, has informed the ASK representatives that “yesterday, (16 August 2019, Saturday), at around 7:00 pm there was a fire in the middle of the slum. As the weather was windy, the fire quickly spread all around the slum. At that time my little daughter, my two sons and I were inside our house in the slum. I lost consciousness seeing fire all around me and my sons had to drag me out of the house”. Kakon Bibi further informed that she works as a domestic help in houses around the slum. Her bed, television, furniture, showcase along with the clothes of everyone in her family were burned into ashes. She could not recover anything intact. Altogether she has suffered a loss of more than one lac taka. In a related question she said that she has been residing in this slum for six years. Her homeowner’s name is Akhtar Mia and she has to pay him 2000TK every month as the house rent. Akhtar Mia has a total of 120 houses in this slum.

From the same slum, Abdul Mannan (36), Father- Bashik Bepary, Permanent Address- Village- Charmonsha, Police Station and District- Bhola, said that he works in a garments factory. At the time of the fire, he was out of the slum and his family members were also in the village for Eid. After hearing the news of the fire he came and saw that everything is burned down. He saved some money after working very hard and had bought a TV and a fridge in installment which has burned down along with all the furniture. He also informed that before the fire for a long time people were saying that they would be evicted from the slum but did not receive any notice from the homeowners or the authority. Thus he thinks there could be a conspiracy behind this fire. In further relevant questions, he stated that the Fire Service arrived after almost an hour of the fire. The first thing they said was that they did not have water with them. Then, after around half an hour a car with water tank arrived and they started to spray water into the fire. By that time, most of the houses in the slum were burned down.

Nazu Begum has been living in the Jhilpar slum approximately for the past 30 years. She has five daughters. She used to rent out 5 houses in this slum and run a tea-stall in front of her house. She took out a loan from TMSS (Thengamara Mahila Sabuj Sangha) and Dutch Bangla Bank to run this tea-stall. At the time of the fire, she had gone out with her family to come back and see that the fire had destroyed all her belongings. Moreover, her tenants (5 families) have gone to their villages for Eid and have not returned yet. She further stated that two of her daughters study in class 8 and all their books were burned as well. Now they don’t even have a place to stay in, let alone study.

From Jhilpar Slum (Kholil Slum), Rohima Begum, Husband- Abdul Quader, Permanent Address- Village- Ombikapur, Police Station- Mehendiganj, District- Barisal, has let the ASK representatives know that 23 years ago, after falling victim to a river breakdown she came to this slum and started living here. She and her husband run a tea-stall next to the slum to run their family. Along with their daughter and two sons they live in 2 of the houses in the slum. Every month they have to pay 5000TK as house rent to Mr. Kholil who is the homeowner. Now even the homeowner is nowhere to be found and there is no certainty as to whether another house will be built here or not. She asked “there are so many of us, where are we going to go? How are we going to eat?” From last night till now (17 August around 12:00 pm) she could not provide any food for her children and no one has even made any arrangements for their food. She said “however, I have heard that the local councilor will make arrangements to feed everyone from the burned slums.
Rahima Haque, head of Chalantika Slum cluster, Nagar Daridra Basteebashir Unnayan Sangstha (NDBUS) stated that, for 40 years she has been residing in Chalantika and many other slums in the Mirpur area. She said that in her experience, she has seen that if there’s a fire in a slum or if a fire is caused it is as a result of a conspiracy either in order to evict the slum-dwellers or for any other reason the government evicts the slum-dwellers, they are not allowed again to live in the slums. They are evicted and then in the empty spaces, multi-storeyed buildings are constructed. Hence she thinks this fire should be properly investigated to see as to whether it was in fact an accident or was the result of a conspiracy to evict the slum-dwellers because the fire took place around the time of Eid and most of the slum-dwellers were not in the slum. Hence, the slum-dwellers have been demanding for a long time that they cannot be evicted without rehabilitation. In this regard, even the High Court has given the same instruction. She has further stated that “this time we have taken a firm stance that we will build our homes and live here again”. However, after further questioning, she has said that till now they (slum-dwellers) were not told that they will not be allowed to stay here.

Statements of the Fire Service and Civil Defence
During the investigation, the on duty Deputy Director of the Fire Service and Civil Defence, Debasheesh Bordhon, informed ASK representatives that on 16 August 2019, at 19:22 (7:22 pm), they received the news that there was a fire at Chalantika slum in Mirpur-7. At 19:28 (7:28 pm) 10 units of the Fire Service first went to the scene and started to control the fire. Then one after another, 14 more units joined them. Along with them, the local slum-dwellers, RAB and police have also helped them to control the fire. With collective help from everyone, the fire was somewhat controlled at 22:30 (10:30 pm). At 1:30 am, the fire had died down completely. However, as the roads were blocked and the entrance of the slum is very narrow, the work was interrupted. He also stated that a total of 4 slum-dwellers and rescuers including Kabir (35), Habib (19), and Rafique were injured during the incident and were sent to the hospital.

In a related question, Debasheesh Bordhon further shared that, the slum-dwellers’ complained that the Fire Service did not have water was wrong. He mentioned that at the scene, the Fire Service brought 11 water tanks on their own. Besides which water was also taken from WASA’s water line and other local sources.

Upon further inquiring he said that other than the four injured people, he has no other news of anyone else being injured or gone missing. However, the Fire Service’s damping and exploration work will continue.

Police Authority’s Statement
After speaking to the Police Station’s Office in Charge (OC), Abul Kalam Azad, regarding the fire that took place in the slum, he said that no case was filed regarding the matter. However, a General Diary (GD) was made and its number is 363, dated 16/08/2019. He also said that the reason behind the fire is being investigated and that right after the fire, the police had also helped the Fire Service in the rescuing activities.

Follow-Up
On 18 August 2019, at around 12:30 pm after arriving at the sight (burned slum), ASK representatives came to know that since 17 August afternoon, the local councilor has been arranging food for slum-dwellers. On 18 August it could be seen that the employees of the Bangladesh National Cadet Corps (BNCC) have been distributing food to the slum-dwellers in the local Bangabandhu Bidya Niketan School. However, some of the slum-dwellers have complained that as dinner was being given to them after 12:00 am and breakfast was given during lunchtime. However, due to insufficient food, many of them could not eat properly. 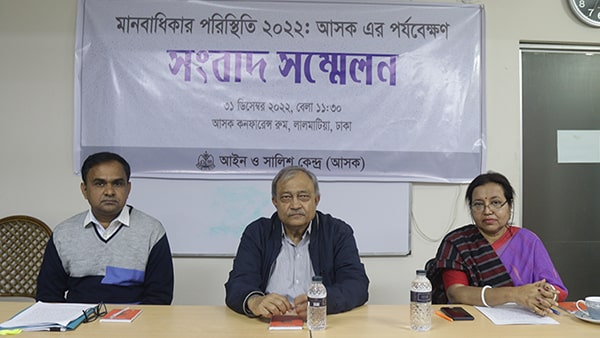 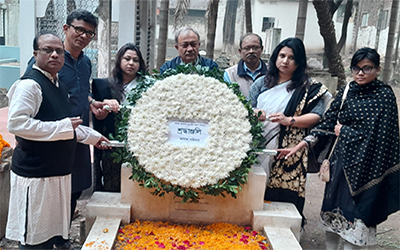